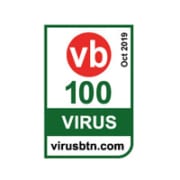 NANO Antivirus Pro has the thirteenth VB100 certification award to add to our collection! The product has demonstrated the highest quality for years. The VB100 test team remarked it: “Nano Security shows its antivirus product continues to keep up with the latest threats in the ever-changing malware landscape, thus proving that its in-house built antivirus engine is a match for many of its big-name competitors”.

The VB100 test laboratory (Great Britain) is one of the known world leaders in the antivirus testing area. It performs tests that are accepted all over the world for more than 20 years.