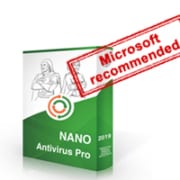 Upon the comprehensive Microsoft’s testing of the products of NANO Security, the company confirmed the right to be included in the list of reputable antimalware producers.

The recommendation of NANO Security products covers the operation systems Windows 8/8.1 and Windows 10. Nevertheless, NANO Antivirus Free and NANO Antivirus Pro can be used on PCs with an older OS including Windows 7. At the stage, the Microsoft doesn’t perform tests of compatibility for operations systems older than Windows 8 because the support of those versions of Windows was ended. But the internal testing of NANO Antivirus Free and NANO Antivirus Pro confirmed the full compatibility and no known issues with any versions of OS Windows starting from Microsoft Windows 7 (32/64 bit) and higher, and also Microsoft Windows Server 2008 R2(32/64 bit) and higher.

To be sure that NANO Antivirus Pro is compatible with your device you can use the free 30-days trial version. You don’t need to provide your financial data for that. No auto-renewal, no risk. You buy a license only if NANO Antivirus Pro meets your requirements.